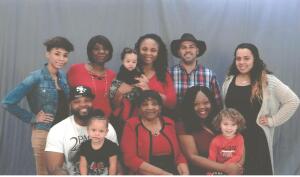 Joan Wigfall Thompson, beloved mother, grandmother, and great grandmother, transitioned into the arms of the Lord on November 4, 2020, at 2:05 pm. Born in Register, Georgia on January 3, 1941, to Katie Mae Williams and Andrew Jackson Wigfall; Joan would be raised by her paternal aunt and uncle, Elizabeth and James Sapp in Millen, Georgia.

Joan graduated from Burgess Landrum High School located in Millen, Georgia on May 12, 1958. Joan went on to complete her college education at Savannah State University (formally College) where she obtained a BA in Sociology in 1966.  At the time of graduation, Joan made a decision to move to South Bend, Indiana to be closer to her father. While Joan spent the remainder of her life in South Bend, she often spoke fondly about her hometown of Millen and loved to visit on a yearly basis to attend her high school reunion.

Joan met her husband, James Thompson Jr., in high school, although the two did not connect until years later and would eventually be joined in holy matrimony in August 1990. Unfortunately, Joan would only enjoy two years with her husband before he lost his battle to sickness.

Joan had a passion for nurturing and caring for children. Once settled in South Bend, Joan received a job working for the South Bend School Corporation as a gym teacher at Oliver Elementary School and Harrison Elementary School. This position awarded Joan the opportunity to work with numerous students, many of whom she would remember for years to come. Joan enjoyed seeing past students in the community. She would often stop to talk with them and loved to share memories. Joan transitioned from the South Bend School Corporation to work as a preschool teacher at Episcopal Daycare. From there, Joan would spend numerous years running her own homecare center called Wigfall’s Home Daycare. Joan would eventually settle as a permanent substitute teacher for Jackson Middle School until 2006 when she retired from the school corporation.

Joan has always been a believer in Christ and was baptized at an early age. After moving to South Bend, Joan found her church home at Pilgrim Baptist Church. She would remain a faithful member of Pilgrim for over 50 years. She was proud to be pastored under the leadership of Rev. Charles G. Rowlett until 1989 and then under, current pastor, Rev. H. Gregory Haygood beginning in 1990. She spent a significant amount of years singing in the church choir. However, her real joy came from just attending Sunday services and being in the midst of her church family. Even in her final days, Joan continuously asked to go to church. She exemplified an unwavering faith in the Lord, and that was an influence on those around her.

Joan was a loving mother, grandmother, and great grandmother. She loved to tell anyone who would listen, how proud she was of her family. She was very involved in the child-rearing of her grandchildren. She never missed a football game, cheerleading competition, parent-teacher conference, etc. She loved being around her family. She enjoyed spending time in the kitchen, creating delicious meals and specifically enjoyed watching others enjoy her food. She always encouraged her family to be their best selves and instilled in them a spirit to believe that they could achieve anything. She exhibited a type of unconditional love for her children, grandchildren, and great grandchildren that gave them the foundation to believe that they could overcome any obstacle.

Along with her parents, aunt and uncle, Joan now precede in death by her husband James Thompson; her siblings Melva Holiday, Dorothy Carter, and James Williams; and son-in-law Jason West

Joan Wigfall Thompson, our phenomenal momma!  You are forever loved and will be greatly missed. As your legacy, your spirit will live on through us.

Rest now, our love, your job is done.

To send flowers to the family or plant a tree in memory of Joan Wigfall Thompson, please visit our floral store.