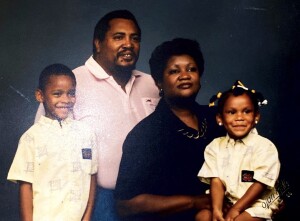 Johnny C. Reed “Rock” 78 of South Bend Indiana departed this world surrounded by loved ones on Friday, March 12, 2021. Johnny was born August 19, 1942, in Gunnison, Mississippi to the late Charles B. Reed and Mae Eliza (Overstreet) McCoy.

At the age of 16, the family relocated to South Bend, Indiana where he attended Washington High School. Growing up on the South East Side of South Bend, he met and married Ruby Mae Perry, and even though they divorced (twice) they remained close and Ruby cared for him for several years. During their union they were blessed with four children, one son: Jeffery Reed; and three daughters: Teresa Taylor, Selena (Kenneth) Miller, and Tonya (Ronald) Buntyn, all of South Bend, Indiana; 13 grandchildren and 32 great-grandchildren.

Johnny worked for Elkhart Products for 35 years before his retirement.

Johnny loved to barbeque and when he was no longer able, he passed on his cutting board and cleaver to his son-in-law, Ronald to carry on the barbequing tradition and was never let down, (he loved his barbeque). Johnny loved playing bingo, fishing, hunting, watching sports, and playing cards with his special brother-in-law, Leroy Lloyd.

The family would like to extend their gratitude to Signature Healthcare and resident/roommate Dennis Jackson who held his hand until family arrived.

To send flowers to the family or plant a tree in memory of Johnny C. Reed, please visit our floral store.