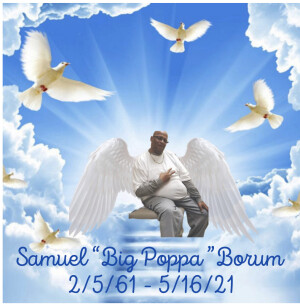 When his family moved to Missouri, he attended Scott Country Central High School. In his younger years, Samuel resided in California, Missouri, and Ohio but he eventually returned to Elkhart, Indiana.  Samuel was a hard-working man. He was employed by Lippert Components for several years.

Samuel was lovingly known by family and friends as “Big Poppa” and "Uncle Sam." Samuel was a loving husband, son, father, brother, uncle, and friend. Anyone who knew Samuel knew that family was very important to him. He had a host of bonus children, nieces, nephews, and cousins. Samuel did not allow blood to determine who family was to him. He had a heart of gold. When Samuel loved you, knew you were loved by him.

Samuel was known for his famous barbeques, family gathering, and wonderful cooking. Samuel was very straightforward. He would say what he wanted when he wanted even if hurt your feeling or not, but it was said out of love. Samuel was also a jokester. He could make you smile even when you didn’t want to because he had jokes. You could always feel Samuel’s presence in the room, even if you did not hear or see him you knew he was there, you most diffidently felt his presence.

To send flowers to the family or plant a tree in memory of Samuel Borum, please visit our floral store.