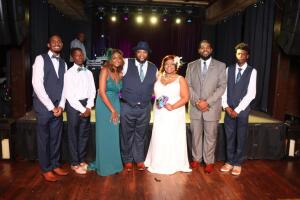 Yolanda Donnelle Jackson-Page, self-proclaimed ‘Yo Yo The Diva’, was born October 7th, 1977 in Grand Rapids, Michigan to Stephanie (Jones) Wheeler and Donnie Wheeler.

Raised in South Bend, Indiana, she graduated from John Adams High School in June 1996. A hard worker and ‘go-getter’ from an early age, Yolanda’s employment included the USPS as a postal carrier, South Bend Community School Corporation as a bus driver, and AWS as a resident coordinator. Dedicated to pursuing her dream, even while working, Yolanda earned her Associate Degree in Nursing from Bethel College in May 2015 and began her nursing career. After relocating to Murfreesboro, TN in July 2017, she worked as a night shift nurse at StoneCrest Medical Center in Smyrna, TN. She lived a life of caring for others, and furthered her reach in 2020, when she began a travel nurse assignment for Aya Healthcare, allowing her to work in multiple care units which included COVID trauma care during the global pandemic.

During many of her trips, to and from her travel assignments, she would often talk to her first best friend, her mom, Stephanie (until DP called). Two peas in a pod, they could talk for hours about any and everything and did so for years. She specially coined her mom and maternal aunts, The Golden Girls. She took pleasure in planning trips and outings for them, even when she would complain about how they were driving her crazy, she somehow always wanted to take them on another trip. Fiercely loyal, it was nothing for Yolanda to jump on the highway (with her Speedway coffee of course) and travel to visit family and friends. However, her most joyous adventures were
traveling across the world with her husband Donny, who she married in October 2021 in an intimate dream wedding ceremony in New Orleans, LA. As a wife, Yolanda has been a supporter, best friend, and travel companion. She was even coined DJ Skribble Scrabble
because of her silly random freestyle rap battles.

Yolanda, or momma as her children would say, did everything humanly possible to make sure that her children were well taken care of. This sometimes included working two or three jobs at a time to support them. However, she persevered and did it with a smile. She shared with her children her love of music. Though she loved all types of music, she had a special affinity for Uncle Charlie - last name Wilson, her all-time favorite. She had a unique relationship with each of her children, swapping and sharing music with Taylor, giving life lessons to her Tevin, or shopping with her broke best friend, Tootie; her love knew no bounds. She pushed them to follow their dreams, live their best life, and was extremely proud that all had pursued college degrees. Her children will miss her random “you good” texts, long conversations, and cooking…and boy, was she a good cook! She shared a special bond with both of her brothers. With love and admiration, she regarded the eldest Donald as her ‘Big Bro’. The second half of a dynamic duo, Justin and Yolanda, who affectionately called each other Obi-Wan Kenobi and Yoda, shared many childhood memories and a few sibling rivalries that brought laughs to them in their adult years. While he was her ‘little/big’ brother, she was no doubt the protective big sister. Though they weren’t related by
blood, nothing could make her relationship with her sisters any closer, her lifelong “sisters” included: Twilah DuBose, Connie Dempsey, Jorie Lawson, Charla Scott, Maritza McCallister, Leisgha Brunson, and Chavela Price. It was no secret that Yolanda loved hard and that her family was always front and center in her affections. Even in mourning, we are grateful for the time God loaned her to us, it would have ever been enough.

“ Our diva then, our diva now, our diva forever… “

To send flowers to the family or plant a tree in memory of Yolanda, please visit our floral store.